U.S. Cyclists Are Masked, and Criticism Is Not 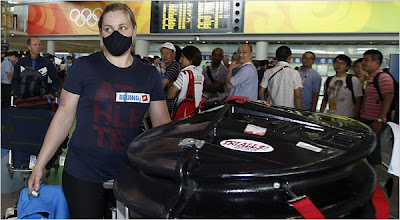 A cyclist from the U.S. team arrived wearing a mask at the Beijing airport on Tuesday ahead of the 2008 Beijing Olympic

By JULIET MACUR
Published: August 5, 2008
BEIJING — After months of speculation about how Olympic athletes would react to the air quality problems here, some answers arrived at the airport Tuesday, when four track cyclists on the United States team stepped off their flight wearing masks over their mouths and noses.

A cyclist from the U.S. team arrives in Beijing wearing a mask. The United States Olympic Committee's lead exercise physiologist advised U.S. Olympians to wear the masks on the plane and as soon as they stepped foot in the city.
They were the first athletes at these Summer Games seen wearing masks publicly to combat the effects of pollution, and the sight of them drew considerable attention and criticism from United States Olympic officials.

The United States Olympic Committee had issued the specially designed masks to protect athletes from the potentially harmful air here. The U.S.O.C.’s lead exercise physiologist, Randy Wilber, had advised the athletes to wear the masks on the plane and as soon as they stepped foot here.

The track cycling events held indoors here begin Aug. 15, and some of the team’s members — Mike Friedman, Sarah Hammer, Bobby Lea and Jennie Reed — were prepared for the worst when they arrived in Beijing, knowing that the air quality was questionable. 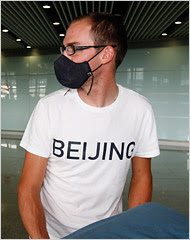 Two of them wore their masks on the plane. The other two put on the masks when they arrived at the airport. Soon, photographs were splashed on television and on the Internet.

“This is really a surprise, because I didn’t think it was going to be such a big deal,” Friedman said. “Why we wore the masks is simple: pollution. When you train your whole life for something, dot all your i’s and cross all your t’s, why wouldn’t you be better safe than sorry?

But U.S.O.C. officials were apparently unhappy with their choice, scolding the cyclists for walking off the plane wearing the masks because it might embarrass the host country, Friedman and Lea said. The cyclists said they did not remember the name of the official who spoke with them.

“They told us that the Chinese were mad and that this is a politically charged issue, but we didn’t mean to offend anybody,” Friedman said. “When they handed us these masks, they never said, ‘Here they are, but don’t wear them.’ ”

Lea said, “It’s disappointing, because I was under the assumption that the mask was approved for use because it was issued by the U.S.O.C.”


The Full Story
Posted by ponyheart at 10:47 PM